Nestled in the tiny remote village of San Javier is a Jesuit mission called Mision San Francisco Javier de Vigge-Biaundo, or San Javier Mission. The current building dates back to 1744  and is one of the best preserved and oldest Jesuit missions. It is in remarkable shape considering it has had little restoration. In fact, it is still used as a church today.

The drive takes you on a winding road through the Sierra de la Giganta mountain range offering stunning views of the mountains, canyons, and Loretta Bay far in the distance.  We made the trip on our own with a rental car but you can also take a tour or taxi. From the town of Loreta, the drive takes approximately 35 to 45 minutes (38.6/24 miles).

It is incredible to imagine how the early Jesuits were able to build such a big structure in this remote location. The builders mined limestone from the surrounding hills and the alter pieces were brought by ship and then horseback and donkey from Loretto Bay to the mission. The main altar, as well as the two side altars, are framed with 18th-century oil paintings. The altars were built from gold leaf brought in from Mexico City. 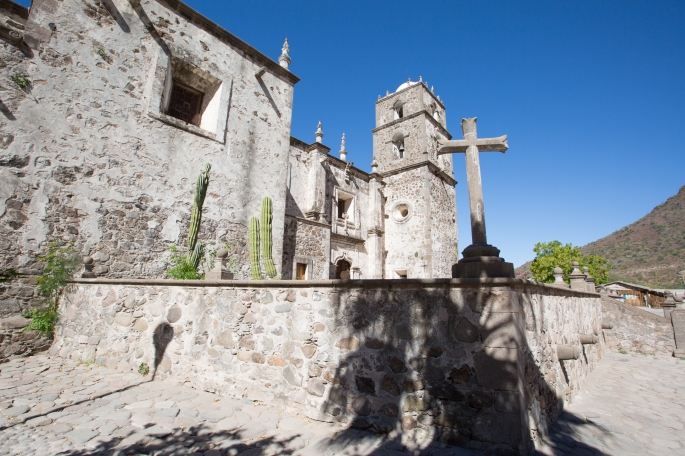