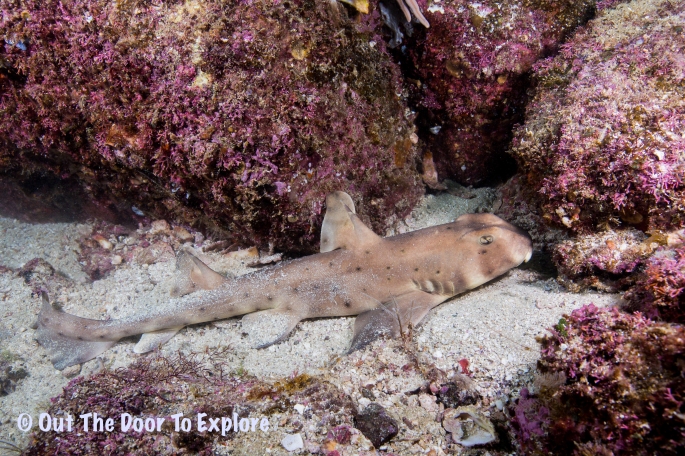 The purpose of our dive was to photograph Horn sharks and we got lucky on our second dive around Danzante Island in the Loreto Bay National Marine Park, Sea of Cortez, Mexico. Thank you to Juan Carlos Reyes Valerio our dive master for finding these rather reclusive sharks. Although we found 3 different horn sharks, 2 were deep in crevices and they were impossible to photograph. However, it only takes one and this shark was out in the open apparently waiting to be photographed. Horn sharks are not strong swimmers and this shark is trying to tuck as close to the rocks as possible.

This area has more than sharks and we saw 3 different species of ray, two that stayed still long enough for us to photograph. The ocellated electric ray or bullseye electric ray (Diplobatis ommata) can generate a moderate electric charge for self-defence. The bullseye or ocellus on the back is very distinctive and is where it derives its name. It is a small ray reaching about 10 inches (25cm) in length.

The second ray we were able to photograph was the spotted round ray also known as the Cortez round ray (Urobatis maculatus). They have short tails compared to many other rays and reach a length of about 17 inches (45cm). This ray didn’t stick around for very long before it headed to deeper water.

A surprise for us to come across was the banded guitarfish (Zapteryx exasperata). We were not aware that there were a guitarfish species in the Sea of Cortez. This fish can reach up to 4 feet (1.25m) and has both dorsal fins of nearly identical size. Unfortunately, it had its head facing away from us partly going into a crevice.